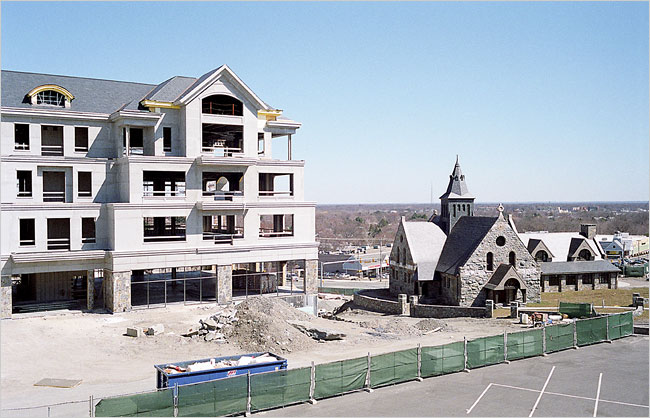 CRANSTON, R.I. — This suburb of Providence has not been spared the economic decline that has swept the rest of Rhode Island, where the unemployment rate, 10.5 percent, is one of the highest in the country. In this city of 80,000 people, home foreclosures have risen, and the bankrupt retailer Circuit City and other stores have closed in Garden City Center, Cranston’s well-known shopping center.

Despite this slide, however, one Rhode Island developer has been steadily plowing forward with a $90 million mixed-use project here. Carpionato Properties, based in nearby Johnston, is taking an unusual 30-acre site, where Rhode Island’s reform school for boys once stood, and creating an outdoor shopping center called Chapel View, named for an 1891 stone chapel on the property.

When the project is completed this fall, it will feature 10 buildings with a total of 304,000 square feet of retail and restaurant space, 75,000 square feet of office space and 35 residential condominiums — some carved out of the old stone dormitories that once housed wayward boys.

At the junction of two of Cranston’s busiest thoroughfares, Chapel View is notable not only for its unusual history, but also for a distinctive stone wall that the developer has built around half of the perimeter. That granite wall, made from stone on the site and measuring seven feet high in some places, cost $400,000, said K. MacArthur Coates, a senior vice president of Carpionato Properties.

According to Mr. Coates, stone was incorporated into the project’s design as an echo of the Gothic-style stone cottages at the Sockanosset Training School for Boys, which opened in the late 1800s. Carpionato Properties began buying pieces of the former training school in the mid-1990s, years after the state moved its delinquent boys elsewhere.

The company’s founder, Alfred Carpionato, a longtime Cranston resident, envisioned a retail-commercial development for the site, but at the time it was proposed, not everyone was happy with the plans. “Some people thought it should be a city park,” Mr. Coates recalled.

Others expressed concern that the project would worsen an already congested intersection of New London Avenue and Sockanosset Cross Road.

Still others did not want any of the seven stone dormitories to be torn down. On a Web site that tracks the fate of Rhode Island’s old buildings, artinruins.com, dozens of people have posted memories of the “Bad Boys School,” as many Rhode Islanders called Sockanosset.

“I love these buildings,” one man wrote. “Echoes of my mother saying, ‘If you’re not good, I’m taking you to Sockanosset!’ ring in my head every time I drive by.”

The city of Cranston wanted a development that would do justice to the site’s strategic location and contribute significantly to the tax base, said Kevin Flynn, who was the city’s director of planning throughout Chapel View’s long planning phase. At no time was serious consideration given to making the site a park, he said.

The city pushed the developer to include office space in Chapel View. Carpionato added the residential component toward the end of the planning stage.

Seven buildings have been completed and leased to tenants, including the outdoor retailer REI, a law firm, a Ted’s Montana Grill and a supermarket. The three remaining buildings, including the chapel, which will become a restaurant, are expected to be completed in September. Businesses began moving in during 2005.

Three of the old stone dormitories were restored and connected by new construction to form a three-story building with retailing on the first floor, offices on the second and condominiums on the top level.

In addition, Carpionato has preserved the chapel, rebuilt an infirmary that was once attached to the chapel but was destroyed by fire, and protected a magnificent copper beech tree, which now has its own grassy bed in one of the parking areas.

The buildings that were torn down could not be salvaged, Mr. Coates said.

Chapel View is on a hill with sweeping views of Providence to the north and several Rhode Island communities to the east. According to Mr. Coates, the project has been a labor of love for Mr. Carpionato, who started his career at a teenager buying triple-decker wooden houses in the Federal Hill neighborhood of Providence and now has one of the largest real estate management and development firms in the state.

The company’s portfolio includes two hotels in Rhode Island, numerous shopping centers with a total of 1.3 million square feet of retail space, 500 apartments and 2,000 units of housing for the elderly and handicapped. “Have we been hit by the recession? Of course,” Mr. Coates said.

He noted the recent closing of a Bombay Company store, which had leased 45,000 square feet in Chapel View, as well as a certain “skittishness” on the part of prospective tenants. “No one is immune from the market,” Mr. Coates said.

But because of the project’s location and the fact that Rhode Island’s retail sector is not seen as overbuilt, “we’re very confident about Chapel View,” he said.

The Training School at Sockanosset was part of a “state farm,” which included an asylum for the insane, an adult prison and a state almshouse. Its dormitory cottages were built in 1881 to 1895 and featured rubblestone walls, brownstone quoins and arched windows.

A report by the Rhode Island Historical Preservation and Heritage Commission said, “Although in disrepair, the buildings at Sockanosset, beautifully sited on spacious grounds behind a stone wall, are among the finest 19th-century institutional buildings in the state.”

Carpionato razed three of the old dormitories to construct Chapel View. When the decision was made to let a private developer buy the property, Rhode Island did not yet have a historic tax credit program that would have helped a developer offset the cost of rehabilitating the cottages, noted Edward Sanderson, executive director of the historical commission. Nor was the former school listed on any register of historic places.

It would have been preferable to preserve all of the old buildings, he said, but at that time it was probably unrealistic.

A version of this article appeared in print on May 6, 2009, on page B7 of the New York edition.