Neighborhood of the Week 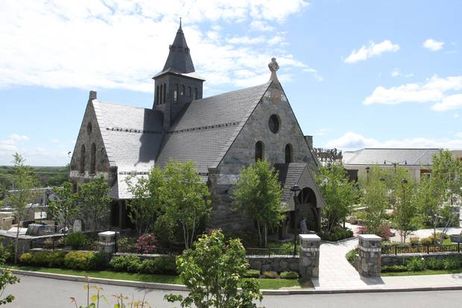 The company purchased the 30-acre Chapel View property from the state; it is the former site of the Sockanosset School for Boys, the predecessor of the Rhode Island Training School.

The Sockanosset School was part of the Howard Reservation, a creation of the former state board of Charities and Corrections, formed in 1886 to establish a state farm that would encompass a house of correction, an asylum for the “incurably insane,” and an almshouse.

According to the Rhode Island Historical Preservation & Heritage Commission, “the development of Howard was Rhode Island’s first attempt to provide social services statewide through publicly supported and publicly administered institutions.”

By 1850, the commission said in a Cranston survey report, 15 towns in Rhode Island had established their own town asylums or “poor farms,” and the state farm was planned in part to “relieve the localities of their responsibilities.”

The state bought two adjacent Cranston farms — “the old Stukeley Westcott farm belonging to Thomas Brayton and the William A. Howard farm further west,” the report added. “ … The selection of a pastoral site far from the city is indicative of the prevailing philosophy that many of the nineteenth-century’s social ills derived from the chaos of the urban industrial environment.”

“The Sockanosset Boys School was located at a distance from the other institutions and also used a different train station, the small one called ‘Sockanosset’ near the foot of Sockanosset Road,” the report added. The report called the “new chapel and infirmary structure” at the school, built in 1891, “one of the most handsome buildings at Howard.”

Carpionato Properties preserved the historic Sockanosset School chapel, which today is the home of a popular restaurant, the Chapel Grille. The company also saved and reused three former cottages at the boys’ school, which have been linked by two new buildings and are now used for retail stores on the street level, with condominiums above the shops. One of the largest retailers at Chapel View is the REI store, which opened in 2007.

According to Coates, 8 of the 14 condos at Chapel View have been sold. When the condos first went on the market, during the worst period of the housing downturn, prices started at $389,000. Today, one of the unsold units, a two-bedroom, two-bathroom condo with 1,820 square feet of living space, is on the market for $629,000. The listing information said annual taxes for the condo were $8,622.

Since construction began at Chapel View, the southern end of the Garden City mall across the street has been revitalized, with new anchor stores including a Pottery Barn, Container Store and an LA Fitness gym.